Mechanical Matchmaking: The Science of Love in the 1920s

Online dating sites like eHarmony and OkCupid claim they can find you the perfect romantic match by using algorithms. These kinds of sites have catchy slogans like “date smarter, not harder,” implying that they’ve finally perfected a scientific approach to matchmaking. Just answer a few questions, and their super-secret love science will find the person who is right for you.

While much of the “science” behind online dating sites has been called into question, that doesn’t seem to dissuade us from wanting to make the messy (and often frustrating) world of romantic love into something quantifiable. This idea, of course, is nothing new—and at least one futurist thinker of the early 20th century hoped that new technological developments might one day create the perfect matchmaking device.

The April 1924 issue of Science and Invention magazine ran an article by Hugo Gernsback, the magazine’s publisher, which examined the different “scientific” ways to determine if a marriage will succeed or fail.

How much would the average man or woman give to know beforehand if his or her prospective married life is to be success or failure? At present, marriage is a lottery. It seems impossible to predict beforehand how your prospective mate will turn out in the future. Through certain fundamentals, which can easily be ascertained, one can be reasonably certain as to one’s choice. We take extreme care in breeding horses, dogs and cats, but when we come to ourselves we are extremely careless and do not use our heads nor the means that science puts in our hands for scientific breeding. There are certain basic tests which can be made today and which will give one a reasonable assurance of married happiness. 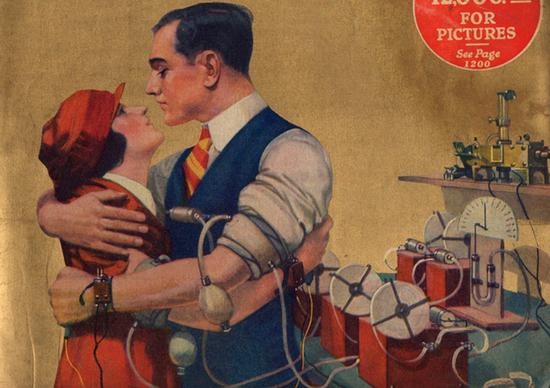 In the article, Gernsback explains four different tests that can be administered to a couple in order to determine scientifically whether a marriage will work.

According to Gernsback, physical attraction is the single most important element for a successful marriage. He explains that in order to measure the level of a couple’s physical attraction for one another; electrodes must be attached to each person’s wrist so that an “electrical sphygmograph” can record their pulse. Then a chain is wrapped around their chests to measure breathing:

…around the chest of each is a chain which is secured to a piece of spring covered by a rubber hose. One end of the tube thus formed is sealed; the other connects to a manometer and also to a tambour supplied with a stylus. The stylus leaves a record on a moving paper tape showing the rate of respiration.

Essentially, if your pulse rate rises and you breathe more quickly while embracing or kissing your partner, Gernsback contends that this is scientific evidence of physical attraction.

The sympathy test involves one of the partners watching the other go through something mildly traumatic, like having blood drawn. In the illustration below, the young woman watches her partner and if her muscular contractions and sudden inhalations “due to excitement” are wild enough, then she’s supposed to be sufficiently sympathetic to him as a partner. 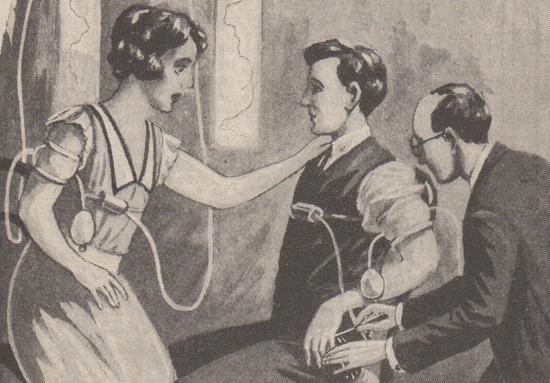 Interestingly, Gernsback claims that more marriages are probably wrecked by body odors than any other cause. During the body odor test, the couple is made to smell each other (“not a pleasant experience,” Gernsback opines) by one person being placed inside a large capsule with a hose coming out the top. The hose is led to the nose of the other person and if the smells aren’t found too objectionable (again, measured by devices strapped to the chest and wrist) then the romantic pairing is deemed safe.

According to Gernsback it’s important that at least one partner can be calm under pressure. The nervous disorder test is perhaps the most amusing in that it imagines a man (let’s call him Professor Sixshooter) delivering a surprise gunshot in the air. The “nervous reaction” of both people is recorded on tape and if they both are too startled “marriage should not take place.” I don’t know about you, but I’d be a little uneasy if my partner wasn’t startled at the sound of a gunshot. 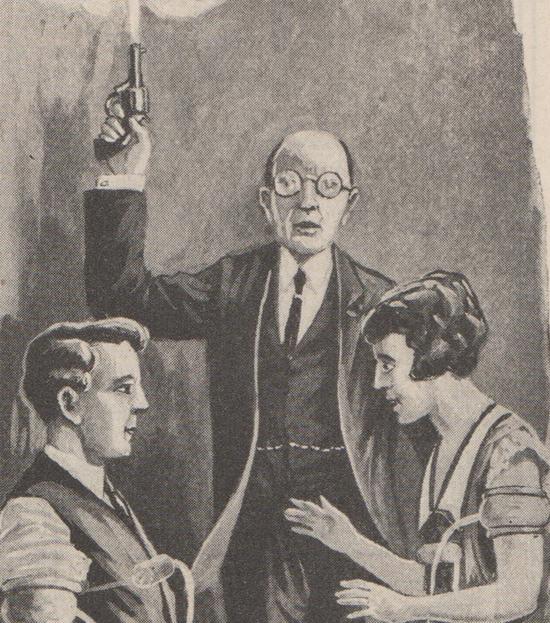